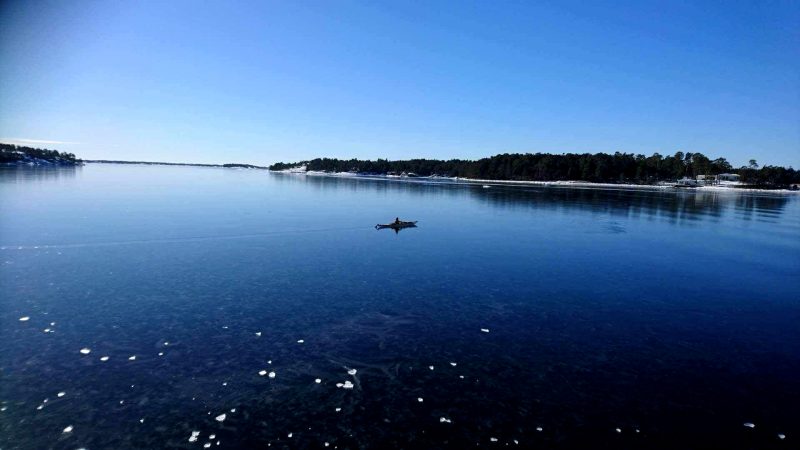 The forecast was brilliant. Sunshine and 3-5m / second in the wind. Perfect for kayaking, I thought and gave up for a two-day trip. Certainly there was ice, but ice cream I’ve encountered before. It was all over the body, I felt happy as a child on Christmas Eve when I picked up the kayak at Anders. He wanted a good trip, and none of us knew that the kayak would not come back.

I drove out of Björkvik and steered towards the big blue. White-washed islands but dreadlocks of ice passed by. I smiled at the sun and the ducks who filled the sky into flocks. Streams of ice sometimes covered the water. I played by splashing ice and paddling in thin, shining ice. A bit thicker stretches I had to hack me through and was surprised when it was like driving into clay when I came to the last bit where ice cubes were packed tight. I got splashing and shaking the kayak through the mod, but it worked.

Snowy archipelago. Light blue sky. Silence that’s so lazy that it’s almost in the ears. No boats, just me and the endless beauty. It’s as good as life can be. I ate lunch, a heated lunch box, on the island where I slept in January. Now in March it’s so luxurious that the sun is up till six o’clock and I can paddle a few hours longer than two months ago.

I played, paddled and enjoyed until it was time to find a bed for the night. A fifty-foot wide ice cover surrounded an island where I was in a place. The sun had begun to sink, so it was time. The first forty yards went well to hack me through the paddle, then it was just thick mourning. I could not paddle me through or join the chopped ski rods, made it alone to bring a kayak on ice. I waved and rocked my body while I was splashing as much as I could. When I finally reached land, it was at the tip of the kayak, directly to the ice on the beach, it was impossible to have the kayak to lie along. In a piece of art, I managed to balance in the overgrown paddle shoes over the kayak’s ice-covered roof and take me to land on the ice-cream ice-formations. Then there was the usual gathering of wood, set of tents and then I stared after star was lit while I fed the fire and dried my paddle gloves. In the morning it was ice as far as I could see. I crossed the island to pan in the other direction. Is there too. A nuisance of anxiety appeared in the heart – how would this go? The last ten meters yesterday were heavy and now I only saw ice wherever I saw. I went skiing on snow and ice to get out and discovered that – the ice bar! Wonderfully! My heart rejoiced and I stuck out with my ski poles. But, to the right. I wanted to the left. I staggered and staked, but the stubborn wind made me out of class. I banned and swore, but it did not help. On an island, I came by chance, I went out and tensioned again. Is everywhere. I went to Orrön and found a bastard ice cream that I could go on. The kayak I drew like a toboggan after me. At a change of color in the ice took a fun end. My ski pole went straight through and I got to go to the kayak and strike again. It is difficult to stack 64 kg of Kristina and 30 kg of kayak and packing, but this time the kayak went straight. A ferry drove by, and I thought, “Now take a few cards on me”, it has to be right comic out where I stood in the middle of the ice and went skiing with kayaks. The ferry made a law and I saw the opportunity – a drain! After a little stabbing I was able to paddle. But where was the ferry? I had no idea. After a time of paddling I ate lunch and enjoyed a blow in the sun, thinking that now it’s quiet, now I’m going to land. As I paddled on, the gutter was gone. I saw open water farther and stabbing and stabbing and stabbing – but just slid left. The water was on the right. After stabbing me through a few hundred meters of ice, I was twenty feet from the water, but there was no way I could get there. No matter how much I took, there was no chance of breaking the ice to the right of me and taking a shot against the ice on the left was as worthless as it just exploded. I decided to back and try to drag the kayak along an island instead, hoping for the same thick ice I had before. BLANK! Here the ice had melted at the edge. I cursed my decision, but slowly on the ice felt impossible, my arms were over. I decided to go kayaking on the snow on the island instead. I was careless. The kayak slipped over the rocks, rolled, I had to lift it up on the bridges, my arms trembled, I bumped. In the end, strike seemed better. Just when I was out on the ice came a man “You’ve come a good way. I saw you from the ferry. And you – there’s a ferry to Stavsnäs in two hours “. Then we resigned if I had to get to Björkvik before it was dark. If I just came out to the watercourse I looked further away, we should reason, but I got to hurry. I stuck out again. The wind blew me farther and farther to the left. The trough was on the right. What I had thought was a drain that led to the right was bad ice cream. Helplessly, I saw how I came farther and farther away from the water. In addition, I knew I would have a few hours of kayaking in the wind when I came out to the water.

Inadvertently I came to a small island, with the kayak straight towards, obviously. This time I put my foot on the ice to get away, even though the ice gave me a kayak. It went as it should-I plummeted straight into the water with my whole leg and almost climbed the kayak, but managed to climb. It was only realized – time for expulsion. If I take such stupid decisions, it’s not a place to go on. The strength of the arms was over, it did not matter how much I took. I could not get to the open water I wanted to reach. And if I had succeeded, it would be doubtful if I could manage to paddle the remaining kilometers before it got dark. I stuck back in the trench, back to the man who had to carry almost all my things to the other side of the island, where the ferry would go. My arms did not hurry. The kayak was left on his plot. On the ferry we sat and watched the pictures he had taken me earlier in the day – someone really did catch that kayakdriver on the picture. Then he pushed me from Stavsnäs to Björkvik so I got home the car. I can get the kayak another day.

The front desk – it was a perfect adventure! I learned a lot, realize that I have plenty left to learn and look forward to doing it, it was physically exhaustive, indescribably beautiful and I managed without harm or death. In addition, I received a reminder of how amazingly nice people there are in the world.

Now I’m thinking about how to manage a kayak over a blanket. Tips are welcome!